Project goal:
– Replace an outdated Analog TV Head Station with a Digital IPTV Station: The broadcast quality of the Analog Head Station at the hotel did not meet the modern management quality requirements, although the Quadriga Interactive Hotel Television System was installed.
– Develop and implement the concept of a TV system that allows you to remotely change the list and number of broadcast TV channels (without the installation of additional devices). Hyatt Regency Kyiv has provided a list of over 50 preferred base TV channels.

Solution:
– The WISI Tangram Universal Modular IP Platform has been selected for the installation of a digital IPTV station, which allows receiving signals in any of the DVB-S / S2 / C / T / T2 standards and converting them into SPTS / MPTS streams for the IPTV system broadcasting.
– In order to minimize the cost of organizing the reception of TV channels, RCI Consulting specialists made the decision to arrange reception from several sources – DVB-T2, from the satellite and the telecom provider.

Results:
RCI Consulting has completed a project to comprehensively modernize the Hyatt Regency Kyiv 5* hotel television system (IPTV broadcasting in the interactive hotel television system). IPTV channels from the station are broadcast to the Quadriga core using a Cisco switch, which also performs Querier functionality. More than 10 encoded channels of the provider, received at different frequencies, are decoded on the decoding card using only two cards and multi-service CONAX modules.
The implementation of the chosen solution significantly reduced the power consumption of the stationary part of the television system due to the large-scale reduction in the number of television equipment. Also, the level of temperature released by outdated equipment decreased. This has had a positive effect on the energy efficiency of the headquarters air-conditioning system.
Within the framework of the project implementation, the reception and distribution part of the antenna complex was updated to ensure universal reception / transmission of satellite and terrestrial signals.
All the preparatory work, as well as the installation and adjustment of the system were performed by RCI Consulting specialists at night, which minimized the inconvenience for the hotel guests by switching to a new standard of broadcasting.

About:
Hyatt Regency Kyiv Hotel is a five-star hotel in the historic center of Kiev, Ukraine. It is part of Hyatt Hotels Corporation (USA), which operates a network of premium hotels worldwide. The hotel has 234 rooms (including 25 deluxe rooms). The hotel also has a spa, swimming pool, saunas, several bars, restaurants, conference rooms, etc. 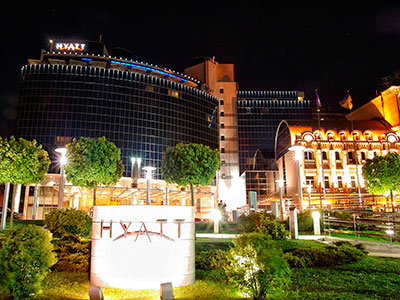