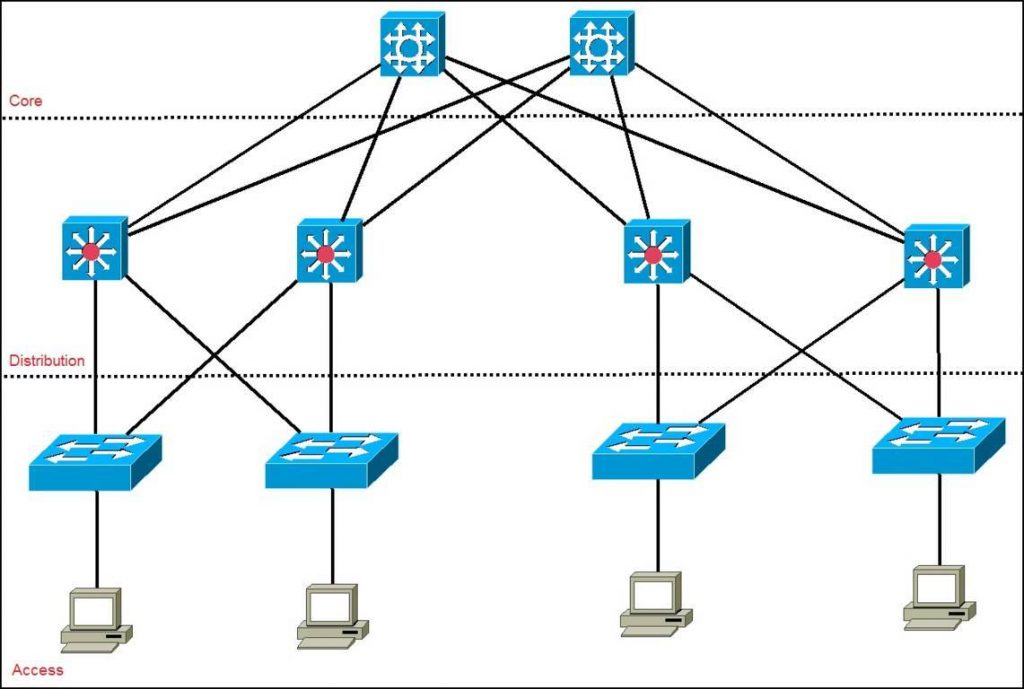 Cisco has identified three hierarchical levels, each of which performs specific network functions.

The model has three levels:

Each level is responsible for the implementation of certain functions. However, these levels are logical and not necessarily consistent with physical devices. In another hierarchical model, OSI, logical levels of hierarchy are also used. Seven of these levels describe the function. However, a specific protocol does not necessarily correspond to the functions. Sometimes the protocol is mapped to several layers of the OSI model, and in other cases, one layer corresponds to several protocols. Similarly, when building a physical implementation of a hierarchical network, several devices may fall on one level, or one device will perform the functions of several levels. Therefore, levels are logical, but not physical concepts.

Core level, base level – forms the core of the network. At the very top of the hierarchy, this level is responsible for fast and reliable transfer of large amounts of traffic. The only purpose of the base level is to quickly switch traffic. Traffic is transmitted at a basic level together for several users. However, at the distribution level, user data is processed, which may lead to additional requests to the base level.

After determining the best access path at the distribution level, the request can be transferred to the base level, where the high-speed request transport to the desired service is implemented. At the distribution level, a network policy is established, and a flexible description of network operations is provided. 100-Mbps Fast Ethernet and 1000-Mbps Gigabit Ethernet networks are used.

Access level, workstation level – it manages users and workgroups when accessing the resources of the united network.

The largest part of the required network resource users should be available locally. At the distribution level, traffic is redirected to remote services. Network speed – Ethernet 10 Mbps or 100-Mbps Fast Ethernet